Passion After Dark
The Passion Series: Book One
by J.A. Melville
Cover Reveal 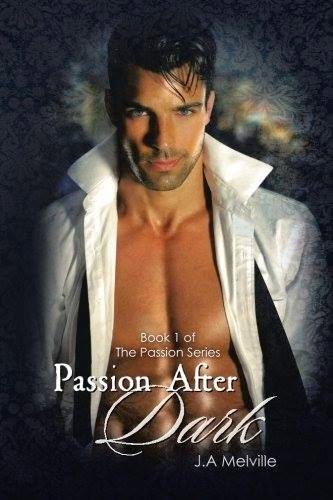 When Dominick Cavallo first saw Allegra Anderson, he knew instantly that she was the one for him. Unfortunately Allegra Anderson, best selling author of erotica and self confessed clutz, didn't know he even existed. That is about to change.

The night Allegra's house mate Cassie insists she come out clubbing with her is the night that fate intervenes.

From the moment Allegra sees Dominick, she's spellbound by his stunning good looks. His black hair, mesmerizing blue eyes and the way he speaks to her has her captivated by him.

The night they meet Dominick disappears and Allegra thinks she will never see him again, but a week later he appears to her when she least expects it and she learns something about him that could change the way she feels about him forever. He is not human, he is vampire.

Dominick is different to the other vampires. He has no desire to live their lifestyle but they are a part of his life and they are not the kind that Allegra wishes to associate with but with the stunningly handsome, but terrifying Fabian as Dominick's sire and him also wanting Allegra for himself, can their relationship survive?

Will they end up driving them apart? Will Allegra be able to come to terms with what Dominick is and when something unexpected happens, that will change who she is forever, can their love survive?

With Allegra's discovery of her newly acquired 'abilities', will she survive those who are threatened by what she has become?

Dominick simply wants the woman he loves by his side for eternity but they have so much against them and with his sire determined to claim Allegra for himself, will it be enough to destroy their relationship?
This is book one of the Passion Series.

For as long as I can remember, I've loved to write, poetry, short stories just about anything. My English teachers in school kept telling me I should write and it took me a lot of years to finally get around to it.

I spent too long worrying about failing as a writer before I realized that living with the regret of never trying was worse.

I live in a sleepy country town in Tasmania, Australia with my partner and our three children, who aren't so little anymore, plus a whole assortment of animals.

My interests are writing of course, reading, watching movies and hanging out at home with my family, our six cats and one dog.

You can find me on Facebook under my author page J. A Melville and my book's page Natasha's Awakening.

Great read thanks for sharing this