{It's Live!} Cartel. It's what you have been waiting for! 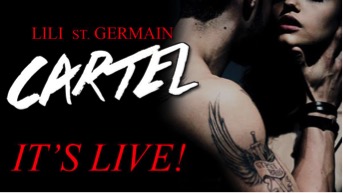 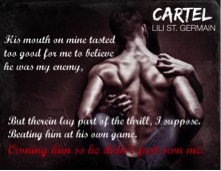 Excerpt #1
‘This isn’t a fairytale,’ Dornan said wryly, as he watched her bring the soup-soaked bread to her mouth.
She paused with the bread in her hand, looking around the room in mock surprise. ‘You mean, we’re not Beauty and the fucking Beast?’
He laughed.
‘Well, you’re certainly beautiful,’ he said.
‘And you’re definitely a beast,’ she countered, pushing her empty bowl away and resting back on the bed.
‘But there’s no happy ever after for you,’ Dornan added, his eyes trailing over the chains to reach the cuffs that were now permanent bracelets on her wrists.
‘No,’ she said evenly, matching his intense gaze. ‘Not for any of us. Not in this world.’

Excerpt #2
‘You do this a lot?’ I asked abruptly.
He took a step closer. I took a step back. It was timed so well, it was almost as if we were dancing some sort of macabre waltz.
He laughed when we moved in unison.
‘Depends,’ he replied, ‘on what this is.’
‘Pick up pretty girls for your daddy?’ I shot back.
Something passed over his face for a moment and settled in his eyes. Something hard. And then, I blinked, and it was gone again.
‘Sure,’ he said, and his voice had changed somehow. Become more reserved, more guarded. Damn. The only person who’d shown me the tiniest bit of normality, and I had just alienated him. As usual, I was running off at the mouth before I thought about what I was actually saying.
‘None as pretty as you, though,’ he added.

New Teasers (not included in reveal)
Excerpt #3
His eyes lit up at that as his gaze travelled across my chest and wandered down to the most private of places. I was clothed and covered in the right places, but in front of him, I felt completely naked. The feeling was unnerving and delicious all at once, which only confused me further.
So he’s sexy as hell. It doesn’t matter. He’s the enemy.
‘It doesn’t matter anyway,’ I added hastily. ‘I’ve got a nasty case of the clap. Better not rape me or your pico might fall off.’ I thrust my chin out as I used the Spanish term for ‘small dick’, smirking at the Gypsy Brother as his warm hands continued to roam every bit of bare flesh on my arms.
Dornan laughed at my admission, a throaty noise full of gravel and insolence that made me increasingly unsteady on my feet.
‘I’m not going to rape you,’ he replied, amusement dancing in his dark eyes. ‘And you don’t have the clap. So don’t use that one on me.’

Excerpt #4
Girls who were traded in this world never lasted long before it destroyed them, and the Gypsy Brothers had the blackest touch of all.
She blinked her huge eyes, and tears fell from them, running down her cheeks and hitting his hand. He lifted his hand off her lips and brushed more tears from her cheeks with his fingers.


Dornan wanted to tell her she shouldn’t cry. That crying implied weakness. But, as the saltwater leaving her body burned on his hand, he said nothing. Because the minute he left the room, he was going to press his tongue to every one of her tears that had fallen onto his skin and taste how sweet they were himself. 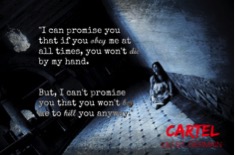 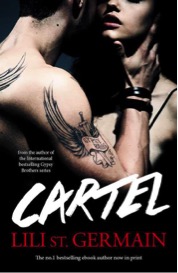 How much is a life worth?

Mariana Rodriguez is the eldest daughter of a Colombian drug lord. Growing up in Villanueva, Colombia, she has never wanted for anything. Private schools, a lavish lifestyle, and the safety of the Cartel that her father works for.
At nineteen, she's got her entire life mapped out, and what a good life it's going to be: graduate from college, move to America, and finally be free from the stifling grip of the Cartel.

But he has a daughter, a very smart one, a daughter who would give up her very existence and offer herself as payment for her father's sins, to ensure her family survives.

But falling in love with the man who owned her wasn't part of the plan ...

About the Author:
Lili Saint Germain

Lili writes dark romance, suspense and paranormal stories. Her serial novel, Seven Sons, was released in early 2014, with the following books in the series to be released in quick succession. Lili quit corporate life to focus on writing and so far is loving every minute of it. Her other loves in life include her gorgeous husband and beautiful daughter, good coffee, Tarantino movies and spending hours on Pinterest.