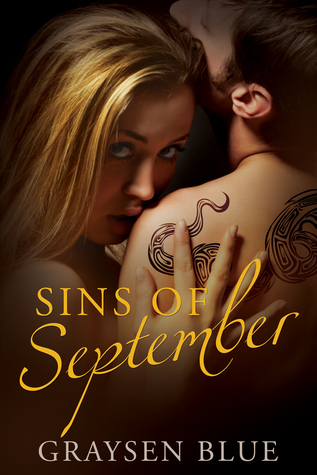 September Dawson is not quite fourteen when her mother takes off, leaving her and her four-year old half-sister Scout, under the care of Jesse Ryan, her much younger husband, and September's step-father.

Shortly afterwards, September is sent to live with her maternal grandparents in Mississippi. Four years pass before she returns to Arkansas, at the request of her step-father, to take care of her younger sister for the summer. It's the summer going into her senior year, and September becomes not only a mother-figure to Scout, but a slow spark ignites between her and Jesse. September is all about fanning the flame; Jesse, however, is all about denial.

This novel is not about taboo sex; this story deals with what some may consider taboo love. September is not the 'vestal virgin' being seduced by a man nearly twelve years her senior the summer of 2010. In fact, September has a bit of a sneaky side when it comes to getting noticed, but in the process, she learns about the man she's come to admire and love, and gets some well-needed lessons about honesty, maturity and sacrifice. "Sins of September" is more than a coming-of-age story. It deals with the complications of life; the reality of abandonment, and the drama and suffering that ensues when others want what you have, and the extent they will go to in order to destroy it. Adult Content. 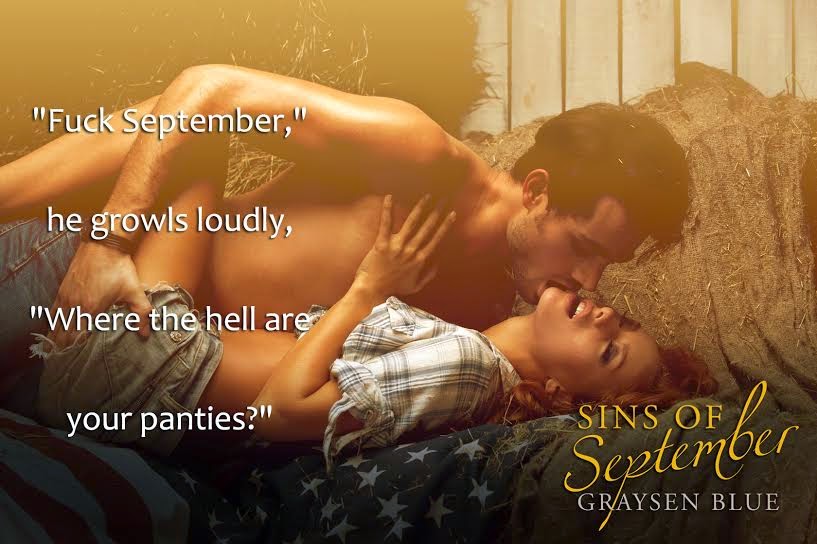 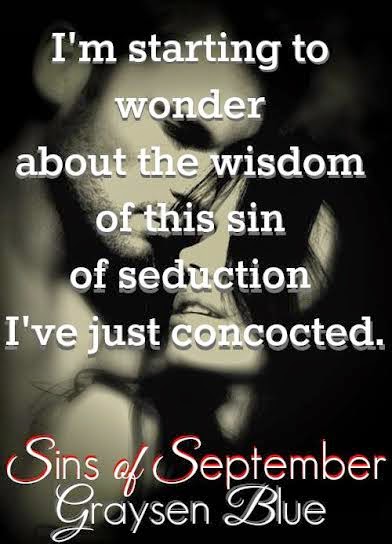 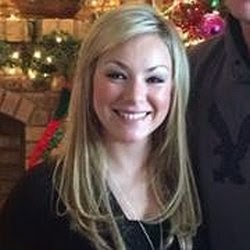 Graysen Blue is a 27 year-old, stay-at-home mom who has previously self-published children's books under a different pen name. "Sins of September" is Graysen's debut novel in the New Adult fiction genre.

Born in the U.K., Graysen attended Princeton University, and holds a B.S. in Economics. She is married and makes her home with her husband, Michael, and their daughter, Scout, on the west coast.

My mind drifts back to the day Jesse said good-bye to me.
The day he came here to pick up Scout.
Scout was tickled to death to see him after being away all summer. She had asked about Mama and Jesse shook his head and said, “No word.”
He sent her out to the car after she hugged and kissed us all good-bye. Jesse assured my grandparents they were always welcome, and that he’d bring Scout to visit when he could. Gram and Grandpa were pleased about that.
“And you,” he said, crouching down to be eye level with me, my heart was hoping that the next words out of his mouth would be, “We want you to come with us if you have a mind to.”
But those weren’t his words.
“You behave your grandparents, and keep up with your good grades. You’re a smart girl, September. I know you’ll have a bright future. Now I’ll keep in touch to make sure you’re behaving, hear?”
I nodded, hoping that I could hold back the tears that threatened to spill. Jesse acted as if he didn’t notice. “I have something for you,” he said, reaching into the pocket of his jeans.
He handed me a small box. Inside was a heart-shaped locket on a gold chain. The locket was the kind that can hold a tiny picture. There wasn’t a picture in this one.
“I reckon you’ll be breaking hearts soon enough. That locket is for you to put a picture of your true love inside, that way you’ll always have him close to your heart.”
He hugged me, and I thanked him feeling like I’d never see him again. I waited until he and Scout where just a spec on the horizon before I went upstairs to my room and let the flood gates open.

I’ve developed this major crush on Jesse—I mean are you surprised? It’s pretty damn obvious, isn’t it? But it’s not an adolescent crush like what I first had on Todd. There’s a sexual edge to this one and that’s totally on me—not Jesse. He’s never been anything but fatherly  to me and that part sucks no doubt. It only means that I’ve got my work cut out for me.
I need to bide my time. The woman in me is telling me that and I will listen because I have to handle this very shrewdly or I’ll look like a total adolescent.

Jesse is in the living room playing a game of checkers with Scout when I make my appearance.
“How do I look?” I ask, twirling around to give them a full view.
I’ve added my brown heeled sandals, and I’ve pulled my blond hair up into a perky ponytail, to keep cool in the summer evening heat.
“You look pretty!” Scout says, her eyes widening. “Are you going on a date with Catherine’s cousin?”
“Sure am,” I answer with a smile.
I don’t miss the fact that Jesse’s eyes are perusing me as well, giving me the elevator stare, up and down, down and up. I see his brow furrow in concern. “Where exactly is the boy taking you?” he asks.
“He said something about going to a summer carnival over in Waldron,” I reply. They have rides and arcades set up—that sort of thing—and then a fireworks display.”
“Scout, go to your room for a few minutes. I need to talk to your sister.”
I’m stunned and Scout is pissed, not understanding why she’s been banished from the room. Her body language says it all.
“I’m not sure what you’re wearing is appropriate,” Jesse says, his eyes lingering a bit longer than usual on my breasts. “I mean, you need to understand what guys think when they see a girl—a woman,” he corrects quickly, “Dressed so . . . provocatively. I’m only saying this because I don’t want you having to spend your evening fighting off his wandering paws.”
I smirk quietly. “I dress like this back home,” I reply innocently. “I mean Todd never complained.”
“I’m only trying to offer advice. I’d hate for you to be lured into something you’re not ready for, is all.”
He’s clearly not comfortable with my outfit. Hah!
“Well, don’t worry. I’ve had to slap hands before. I can handle it.”
He’s staring a blazing hole through me now. I mean it’s a burning gaze.
“I want you home by eleven,” Jesse says.

"You might’ve turned eighteen, but I’m still the adult here. If I wanna sit in my own house and get fucking hammered for once, then by God I will do just that! I don’t need a teenager watching over me. She’s my wife, goddamit!
“And she’s my mother!” I scream. “And she fucking left the both of us! Remember?”
“Hell yes I remember.”
“So that’s it? What? I mean are you gonna go through the rest of your life holding onto something—to someone—whether she’s dead or alive, that makes you feel the way you feel right this damn minute?”
I look into his eyes because I want to hear it from him. I want to know why he feels the need to punish himself for what she did.
He takes another sip of his beer, and shrugs. “Shit, maybe so. Maybe it’s what I deserve for not being enough, and not letting her be enough for herself.”
I have no clue as to what he means by that. I simply throw out a retort for good measure. “That’s weak,” I mumble. “Pathetic and weak.”
I start to get off the couch so that I can get away from his drunken ass. I can take almost anything except self-pity or self-loathing. I’ve no tolerance for it.
His hand clamps around my wrist and I’m jerked back around to face him as he stands, pulling me up against him roughly. “What did you say?” he growls.
“I-I think you’re acting weak,” I mumble, losing a bit of my courage.
He cocks a brow as he studies me intently. “What would you know about love—or life or any of it?”
“Maybe more than you think,” I reply softly, looking up at his beautiful, angry face, meeting his cool gaze with one of my own. Our conflicted eyes lock, and when they do, something passes between us; like a spark or something, and all I can think is that it’s about damn time.
He pulls me closer. I wrap my arms around his strong neck, and tilt my face back a bit to give him ample access because this will happen. I’ve decided that.
He captures my mouth with his roughly—almost savagely, but I don’t care. “Fuck you look so much like her,” he growls, “I need to see if you taste like her too.”
“Do it,” I dare.

Things between Jesse and me have been quiet and strange. It feels as if we’re both aliens of different species. We don’t communicate because we don’t understand each other’s language, but some magnetic force is still inexplicably drawing us together.
I’m wondering if it’s the whole Venus and Mars thing. Funny, but it’s never been evident before now.
It was just after midnight this morning when he came into my room.
My instincts tell me I should refuse him—force him to talk to me in a language that I can understand, but my body has other plans.
Neither of us say a word.
How unusual.
Our bodies do all of the talking for once, and the message is loud and clear—at least it is for me.
This is our good-bye fuck.
Jesse can’t say those words, but with every touch I can feel the intent, the undercurrent, and the finality of it. It’s bittersweet and fragile. It’s a finely tuned instrument that is complicated to play but has the sweetest and most melodious sound emanating from it at the same time. It’s an exquisitely composed opera, pure rapture until the final act when the fat lady will take the stage.
Three orgasms later, she has sung and he leaves my bed with a whisper that carries no promise. “I love you.”