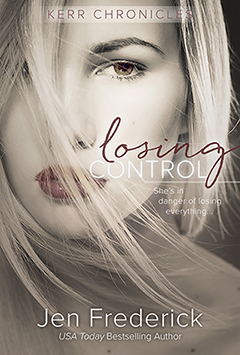 I’d do anything to keep my mother alive.
Anything, including ask Ian Kerr for help. I don’t know much about him, except that he has more money than some small countries. And he’s willing to spend it on me. Just one catch: there’s a string attached, and not just the one I feel pulling me into his arms and his bed. There’s also the plan for revenge he wants my help with.

Every time he says my name, it makes my body shiver and my heart stutter. I know he’s going to wreck me, know there won’t be anything left of me but lust and sensation by the time he’s done with me, but even though I can see the heartbreak coming towards me like a train, ready to crash into me, I can’t get out of the way. I want what he makes me feel. Want what he’s offering.

This may have started out as something to save my mother, but now…now it’s about what he makes me feel. I’m in danger of losing everything that’s important. Worse? Ian's whispered words and hot caresses are making me believe that's okay.

Bestselling author Jen Frederick lives with her husband, child, and one rambunctious dog. She's been reading stories all her life but never imagined writing one of her own. Jen loves to hear from readers so drop her a line at jensfrederick@gmail.com.

The question comes from a rich deep voice to my right. Some stupid actor, probably. The notes of his voice are perfectly modulated as if he spent years perfecting the tone and depth to reach the biggest audience.

“Yeah, what’s it to you?” I challenge because I’m not in the mood to be chatted up by some wannabe in an off, off Broadway production who wants to try out some new lines on a messenger girl.

My sneering gaze melts right off my face when it lands on the owner of the voice. Dark haired and dark eyed, the stranger gives me a slow smile as I take him in. He’s tall, much taller than my five foot four inch frame. I have to trek upward to see the entire package.

And there’s so much to appreciate from his trim waist to the wide shoulders encased in a gray wool suit coat that fits him so well I wonder if he was sewn into it. Tiny stitches on the lapel mark it’s expensive provenance. A dark tanned neck gives way to a firm chin and lush lips.
Bee stung is the description that I’ve heard used to describe the same look on super models. Those lips are about the only soft thing on his face. Those lips and a hollow on the side of his face that appears when those plush lips curve upward. The divot is too shallow and wide to be termed a dimple, but it’s just as devastating.

One hand is stuck in a pocket and his jacket is pushed behind the hand to reveal a flat stomach. No desk paunch on this guy. There’s an intense sexual aura about him. The nonchalant stance, the dark gaze, the lush lips are all an invitation to rip the buttons of his snowy white shirt apart and see exactly what lies underneath all of those fabrics.

I stick a thumb under my jaw under the guise of giving my chin a scratch just to make sure my mouth is closed. This guy? He can practice lines with me all he wants.

“What makes you think I’ll be done with you?” He says and he moves my hands upward until they meet in an arch above my head and he can grip my wrists in one big fist. Free, his left hand slides down my arm, leaving a trail of goose bumps in his wake. His mouth is on my chin, my jaw, and then my neck. He’s tasting me, pressing the flat of his tongue against my racing pulse. “Maybe I’ll never be done with you and your solid gold pussy.” At the last word, he closes his mouth over that pulse point and sucks hard. The only thing holding me up is his hand around my wrist. He pumps his thigh against me and an involuntary moan escapes my lips.

“I don’t care,” I manage to choke out this obvious lie because my body cares a lot. “I’m not a toy. You don’t get to put me in Barbie’s expensive town home and play with me until you’re bored. I’m a fucking real person and my mom’s a real person. And we don’t need this shit right now.”

He doesn’t stop my diatribe but he doesn’t lift his mouth from my skin either. He’s sucking hard at the spot where my neck curves into my shoulder and his hand is under my ass, moving me backward and forward along his thigh. His other hand has worked its way under my shirt and is palming my breast, a large thumb rubbing my nipple. I realize my hands are free and that I’ve been holding them above my head while he rubs all over me. When I drop my hands to his shoulders I find I can’t push him anyway. Instead, I’m using his shoulders as leverage to grind down on his thigh.

The nerve endings of my sex are hyper sensitized and I swear I can feel every thread of his superfine wool pants. His leg moves, a tiny hitch, but it interrupts the rhythm and removes the pressure. “Don’t you stop,” I threaten him, all the heat in my tone has turned from anger to throaty desire.

“Shh, bunny, I got you.” He lifts me completely and spins me around. I have no option but to wrap my legs around him. A few quick steps and we’re in another bedroom with one giant bed and nothing much else. He tumbles me back onto the bed and then lowers himself on top of me, and there’s nothing in my field of vision but the hard planes of his face and the ruddy flush of desire on the high points of his cheekbones. He looks fierce and hungry.

Before I can capture another thought, his mouth is on mine and his hand is pushing aside the lace of my soaked panties. I’m moaning from both the feel of his thick tongue inside of my mouth and the sensation of one and then two of his fingers thrusting inside me. Sucking hard on his tongue, I lift my hips to grind against his hand.
His free hand spears my hair and tugs my head back as if he can’t get his tongue deep enough inside me. He tastes of spearmint and earthiness, of true desire. My whole body is alive and it’s straining toward him, toward completion. I brace my feet against the mattress, seeking more pressure. Breaking away from his mouth, I pant, “Harder. Fuck me harder with your fingers.”

I give him a quick once over. His suit is ruined. He never took even his coat off when he finger fucked me and I’m guessing the fragile wool wasn’t meant to be worn during any intense physical encounters. There are creases in the arms and shoulders were I clutched him and was that a … stain on his thigh. I ducked my head to hide my embarrassment. “You owe me a lot of explanations.”
“I’ll be here when you’re done. Come back and we'll talk.”

I give him an absent nod but it’s not sufficient of a response for him. He strides over and tips my head back. “I’m having this suit bronzed, you know.”

My cheeks heat because I know he’s referring to the mark in the wool made from my arousal. He leans down and gives me a hard kiss. “Come back here tonight.” It’s a demand and not a question.