The Motorcycle Clubs Series and it is SOOOOO Good! 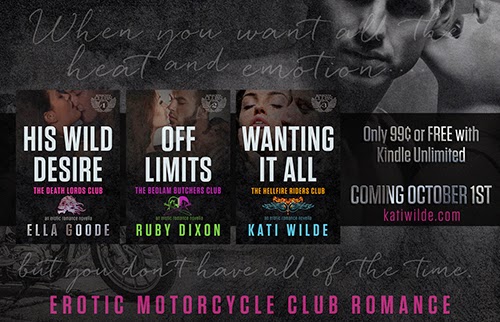 Short Thought on the book(s):


I must say that I have read all of these novella's and they are so good. I always feel robbed by novella's. I am always wanting more to the story, but with this series I was content with the endings.

The sex is hot.

I love MC books. I love the family, the sex, the camaraderie.  And the cuts, riding on a bike, ALPHA's and attending Church. Absolutely LOVE them.

These were some great reads for me. Happy Reading!

His Wild Desire by Ella Goode 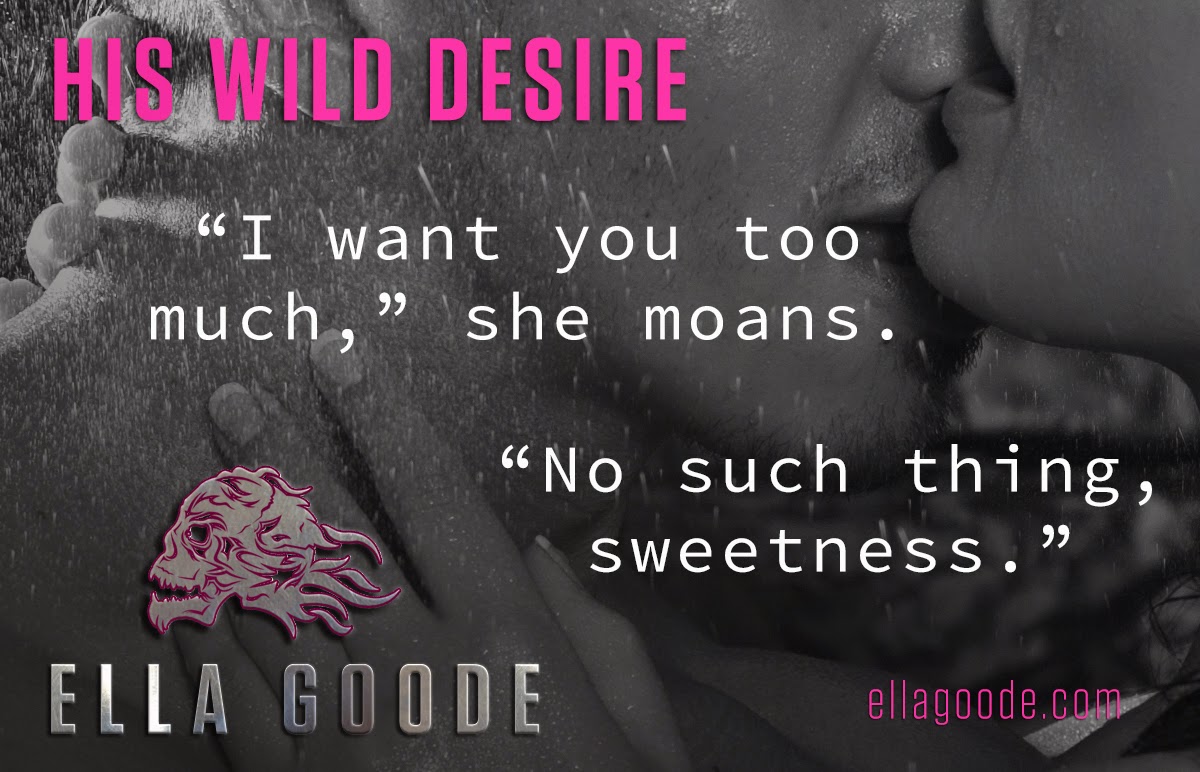 
Grant “Wrecker” Harrison spent three years of his life locked away. He’s out and he’s tired of hiding. He wants everyone, even his father Judge, President of the Death Lords MC, to know she’s his.


Chelsea Weaver loves Grant even though she knows its wrong. She knew it was wrong when she gave him her virginity and she knows it’s still wrong three years later…because Grant’s her stepbrother and Judge is the only father she’s ever known.


Chelsea tries to roll over but I don’t let her. Instead, I shift to my knees and push her ass into the air. I grab my two pillows and shove them under her stomach. She doesn’t resist but she does complain.


“Really? I’m still going to be punished?” she huffs into the comforter.


I smooth a hand over one very round ass cheek. “If you don’t like it, I’ll stop.” I give the ass another little tap, enjoying the shimmy of her curves in response to the strike.


“I promise you’re going to get so wet you’ll be begging for more.”


I give her a harder slap this time and then check between her legs. I smile when at the evidence coating my fingers. She’s turned on but if she wants to play the game of the unwilling victim, I’m down with that too. Role playing is definitely on my checklist.


“Your heart rate is beating pretty fast, Chels. You sure you don’t like this?”


She squeezes her legs together. “I don’t like it.”


“But you’re not telling me to stop,” I observe. She doesn’t respond so I give her another light swat.


At her continued silence, I slap her again, this time on her lower thighs, and then again, along the upper curve of her ass. I pull her panties down and spank her in earnest, making sure between each swat that she’s with me. Soon her heavy breathing fills the room and instead of moving away, she begins thrusting against my open palm.

Off Limits by Ruby Dixon 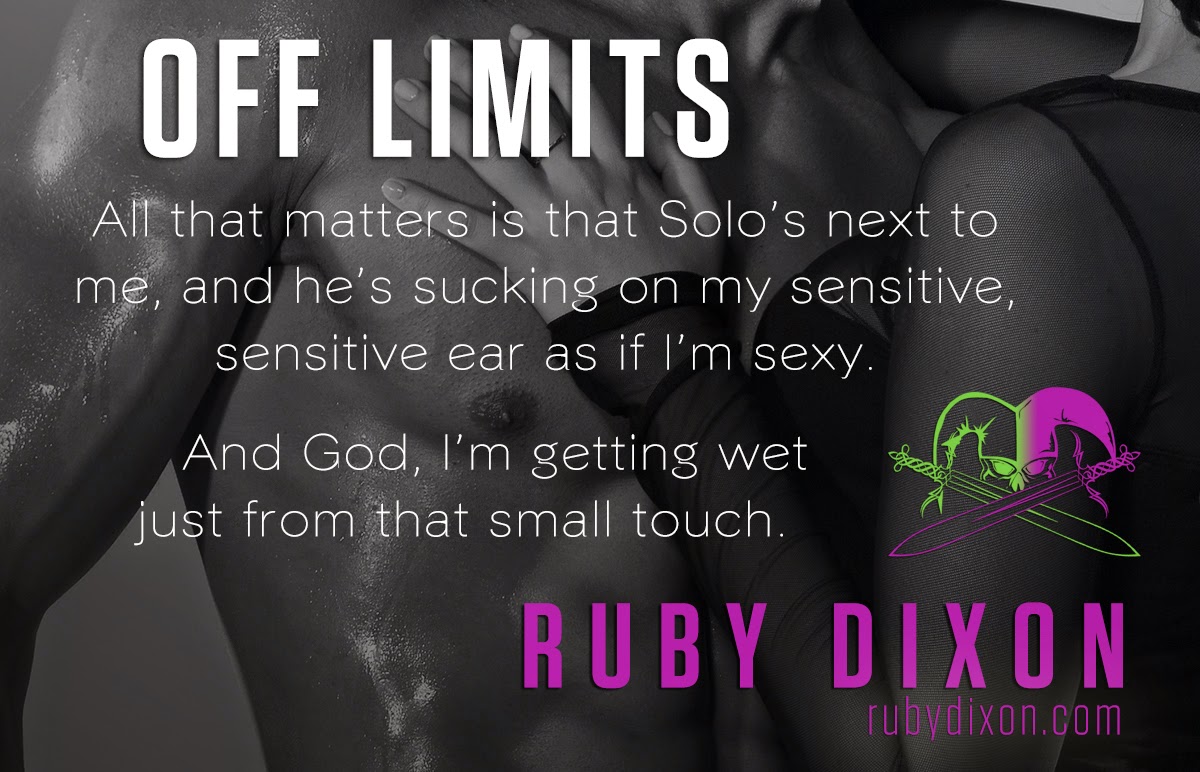 He shouldn’t touch me, but he does.
Late one night, in the middle of danger, he makes me feel things I shouldn’t.
And I know I shouldn’t want more…but I do.
Because hooking up with me? It could cost him his life.


Lucky…isn’t. In fact, she’s considered ‘off limits’ to the Bedlam Butchers because she’s caused them nothing but bad luck in the past. As a bonus? She’s also the president’s kid sister. Single and lonely? That’s Lucky’s way of life. Now, the Eighty-Eight Henchmen are harassing her and they’re out for blood.


Solo…is. In a club where pairing up with a brother to watch your back is mandatory, Solo still hasn’t gotten over his partner’s death two years ago. The club’s pressuring him to name a second Treasurer, but he has to trust that person in bed and out. And it’s damn hard for Solo to trust.


But when he rescues Lucky from the Eighty-Eight, maybe it’s time for Solo to find a partner, and time for Lucky’s luck to turn around…

Wanting It All by Kati Wilde 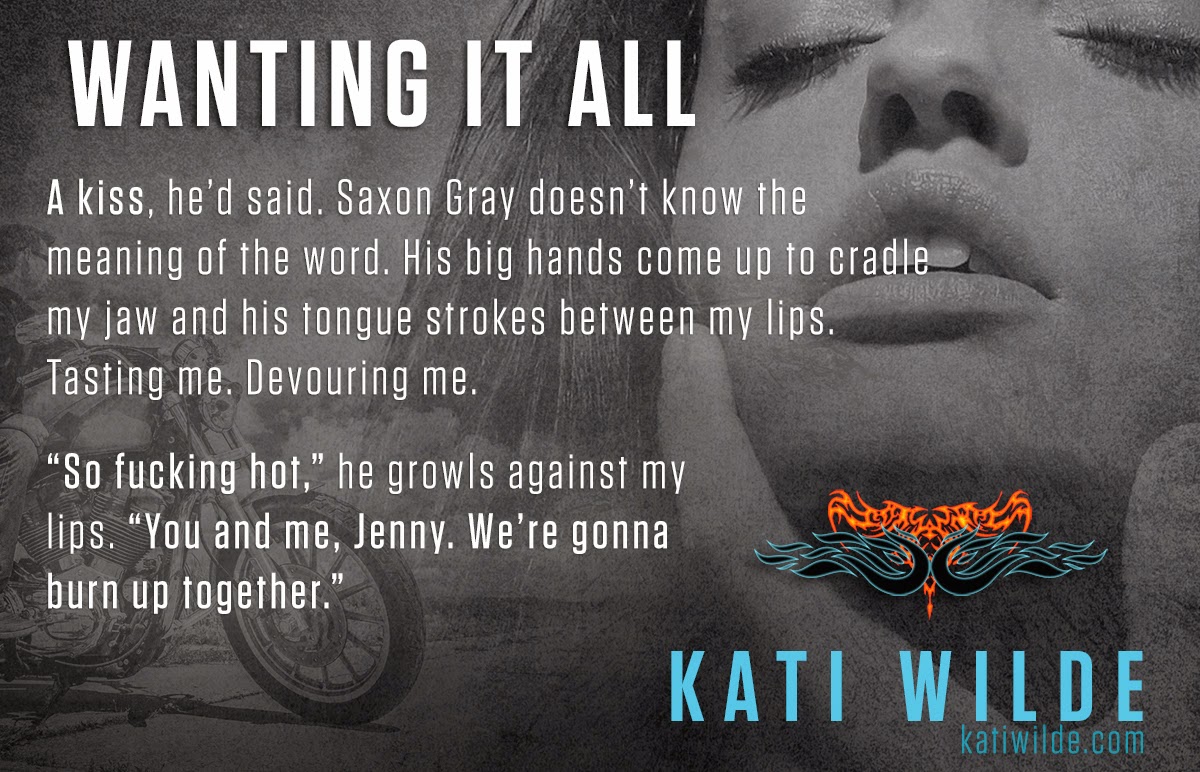 He’s the one man I can never have, but the only one I crave…


Saxon Gray has reason to hate me. He spent five years in prison after saving me from a brutal violation at the hands of a rival motorcycle club – and he paid for that rescue with his freedom. I’ve never been able to settle the debt I owe him…until now.


The menace of that old rivalry is flaring up again, and as president of the Hellfire Riders, Saxon is the one man who can keep me safe. But I want more than his protection. I want his heart.


Ella, Ruby, and Kati love romance, love strong heroines, and love those oh-so-bad alpha heroes. We love stories that are hot, sexy, and dangerous. So when we got together to write this series, we only had one rule: to write the kind of romances that we love to read.


We also know how difficult it can be to carve out time for a full-length novel…and reading a book in parts isn’t always as satisfying. Our series is written for the busy romance reader in mind. In each story, you’ll find scorching heat, wild emotion, and a romance that will have you turning the last page with a happy sigh.

Goodreads Giveaway a Rafflecopter giveaway
Posted by Unknown at 8:00 AM