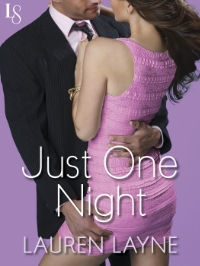 By Lauren Layne
My rating: 4 of 5 stars

Riley McKenna knows sex—good sex, bad sex, kinky sex. Her articles in Stiletto magazine are the publication’s most scandalous—and the most read. But when Stiletto’s fiftieth anniversary issue requires her column to get a lot more personal, Riley is forced to confront a long-hidden secret: Her own sexual experience is limited to one awkward college encounter. Now Riley is about to call in the favor of a lifetime from the one man who’s always held her heart.

Sam Compton knows two things about Riley McKenna: She’s the only woman for him. But as his best friend’s little sister, she’s also completely off-limits. Sam shouldn’t even consider her proposition: to have a one-night stand in the name of research. But the thought of another man putting his hands on Riley is more than Sam can handle, and soon he’s agreeing to one night with New York’s resident sexpot. But Riley’s full of surprises, and what starts as “one time only” soon becomes “just one more time.” And then one more. And before they know it, Riley and Sam learn firsthand that when it comes to love, there’s no such thing as just one night.


My Review:
I was recently looking for a book that could satisfy my needs but also be on a sweet side. I know, I know, I have odd needs for booking.

So I was gifted an advance reading of Just One Night. So to begin the cover is nice. And I can honestly say that pink is not a color that is often present on most book covers but with this being a continuation in the series of Sex, Love & Stiletto, I think this is fitting.

This book is about strong women who want their man. Women who will fit, plan, and be overly creative to get their man.

Riley McKenna wants her man and bad. She has wanted him for years, 10 to be exact. He is apart of the family and her brothers best friend. Instead of seeing him ever so often, she sees him weekly for family dinner. And she is forced to engage in conversations about his love interest and his life absent her. Sam Compton.

Riley's takes a chance that most women are to terrified to take. She opens herself up to a man that she knows wants her. Sam is stubborn and scared and won't take that first step with Riley.

Well sometimes you have to tempt those you want and you have to take a chance. Riley propositions Sam. Sam wants Riley and once he accepts the proposition he can't get enough of her. She challenges him. She is good for him. She makes him a better man, but Sam must change to be the man Riley needs. Can he, is the question?

This book is a stand-alone and does not have a cliffhanger. The ending is sweet but I am so extremely curious to know what more could happen with Riley. I mean, there has to be another book coming and I believe it will be about Emma. Similar to the series I hope that it will give me some more information on Riley and Sam and the beautiful women who dominate the city and the magazine Stiletto.

I truly enjoyed the strength of the women in this story. I have not read the entire series, but I was able to follow along with the other characters in the story.

This is a true Romance. Not much steam (sex scenes are quick and not in detail).

If you like Sex and the City (think Charlotte's sex life (not ever described in full detail) and How to lose a guy in ten days, this is the series for you.

View all my reviews

Posted by Channelling Cloretta at 12:00 AM